I set out on this home project with the intent of providing wireless internet to friends and family when visiting. I wanted to provide internet without allowing any malicious clients from consuming all my bandwidth and/or crippling my internal home network. There are many Wireless Access Points(WAP) that are capable of broadcasting multiple SSIDs. Cisco makes a few from their Aironet series, however they seem to be pretty expensive. I settled with a Netgear WNDR3700 after reading a few posts on hardforum.com that had success running OpenWRT.

OpenWRT is an third-party firmware designed for consumer based Access Points, such as Netgear, Linksys, Dlink, etc. OpenWRT adds many additional features, including the two features I needed. Support for 802.1Q trunking and gives the ability to run multiple SSID wireless signals. 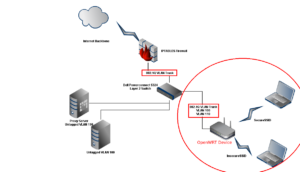 That's it for the first part!

We have a trunk link going from our PowerConnect Switch to our Netgear Access Point. Wahoo!